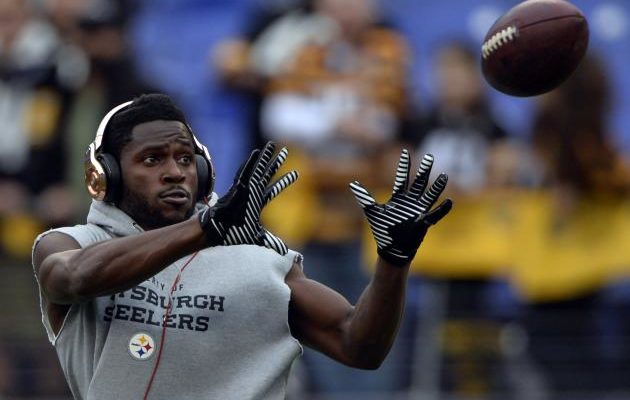 Antonio Brown Net Worth: Antonio Brown is an American football wide receiver and punt returner who currently plays for the Pittsburg Steelers of National Football League. As of 2017, Antonio Brown net worth is estimated to be $18 million

Borin in July 10, 1988 in Miami Florida, Antonio attended Miami Norland High School where he played running back, quarterback, wide receiver and punt returner for the Vikings. He had amazing stats where he ran 451 yards with 13 touchdowns while he also threw 1247 yards and 11 scores in just five games. Brown then attended Central Michigan in 2007. During his first season at Central Michigan, he played 14 games and won Mid-American Conference Freshman of the year and. In his first season he had 102 receptions, 1003 receiving yards and 6 receiving touchdowns. During his college career at Central Michigan he had school record of 305 receptions, 3199 receiving yards and 22 touchdowns.

On 2010 he was signed by Pittsburg Steelers in a 3 year, $1.28 million contract with a signing bonus of $73,075. During his professional NFL career, he won AFC Championship in 2010 and is 4 time Pro Bowl selection and 2 time First team All-Pro. Brown was the NFL receptions leader in 2014 and 2015 and the AFC Receiving touchdowns leader in 2014. He is also the first NFL player to have 1000 yards returning and receiving in a season as well as the first NFL player to have at least five catches and 50 receiving yards in 35 consecutive games.