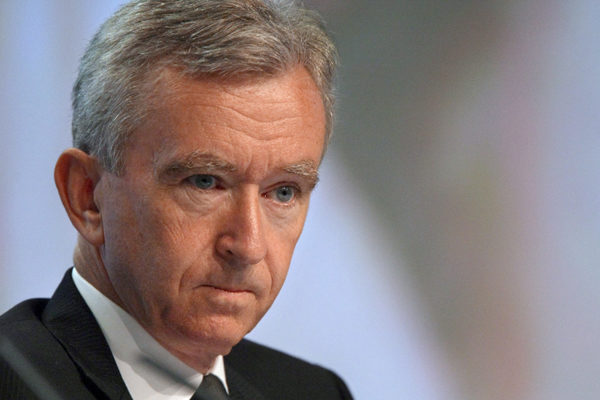 Bernard Arnault net worth: Bernard Jean Étienne Arnault is a French business owner and investor. He is the Chief Executive Officer of LVMH Moët Hennessy Louis Vuitton SE (LVMH). He is the richest man in France and the 12th richest person in the world.  As of 2016, Arnault has an estimated net worth of $34 billion.

Arnault was born on 5 March 1949, in Roubaix, France. He studied at Maxence Van Der Meersch High School in his hometown and then went on to complete a degree in engineering from École Polytechnique in 1971. Arnault most likely made the decision to study in that field as his father was the owner of the civil engineering company, Ferret-Savinel. He went on to join his father’s company after finishing college. He worked there for years and started to take command of the business by expanding the scale of the business exponentially and switching its priorities towards real estate as well.

After changing the look of the company and the total dimension of the business, he went on to become the CEO for the company in 1977 and two years became the successor of his father as the President of the company. In 1984, Arnault broadened his horizons by buying the luxury goods company called Financière Agache. This was just the start of many new purchases as Arnault decided to take control of several businesses at once. He took control over a textile company Boussac and reshaped the brand for success.

1987 turned out to be a big year for Arnault as that was the year that he created his brand called LVMH. Even though there were many internal problems and demands that Arnault made over the goods to be sold but eventually even Dior perfumes was incorporated into the brand. He went on to become the first shareholder for LVMH spending a massive $600 million. After two years of its creation, Arnault stepped up as the chairman for the brand.

Bernard Arnault net worth in years

Through the years, under the leadership of Arnault, the company has reached new heights cementing itself as one of the luxury groups in the world with profits rising up to 500% in the last decade since his reign. Keeping his success with the brand on the side, Arnault went towards new ventures and acquired brands that he thought had a lot of potential like Céline, Berluti, Guerlain, Loewe, and Kenzo. He also constructed the LVMH Tower that opened in 1999.

Arnault, who has been married twice, started to invest in web companies in the early 2000’s as he had already seen the vision that Internet was going to be the next big thing. In those early years of the development of the internet, Arnault invested in companies like Boo.com, Libertysurf, Netflix, and Zebank. He went on to acquire Carrefour in 2007 with the help of Blue Capital and went on to buy the Princess Yacht the following year. Arnault is also an avid art collector and has spent millions in this niche as well. He has also created the Louis Vuitton Foundation and has received many awards during his lifetime including Grand Officer of the French Legion of Honor, Museum of Modern Art’s David Rockefeller Award, and much more.