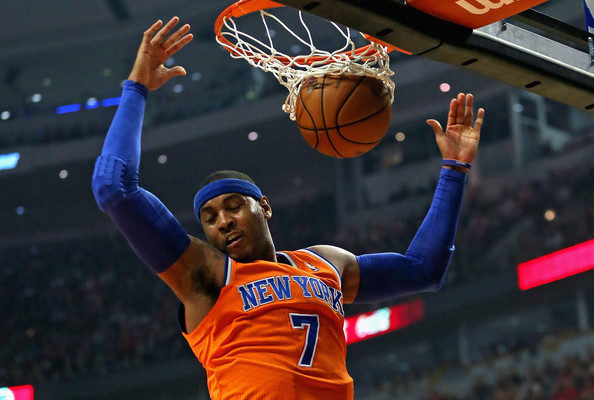 Carmelo Anthony Net Worth:Carmelo Kyam Anthony is an American professional basketball player currently playing for the New York Knicks of the National Basketball Association (NBA). Anthony has been named an All Star nine times throughout his career with a former stint with the Denver Nuggets. Anthony is put in the same bracket as NBA greats LeBron James and Dwyane Wade because of his consistent performances. As of 2016, Anthony has an estimated net worth of $115.5 million.

He was born on May 29, 1984 in New York City to a Puerto Rican father sharing the same name and an African American mother Mary. He had a hard life when he was a child. His father died when he was just two years old. Later when he was eight, his family moved to Baltimore. Anthony says that he grew up watching criminal activities witness before his eyes in the streets.

Anthony attended Towson Catholic High School but later shifted to Oak Hill Academy to improve his grades. He played basketball in both of those schools where he was the brightest. With his help the latter school won the USA Today 2000-2001 high school championship. The next year he attended Syracuse University where he helped the college team win their first National Championship in their history. That freshman year he won the “Most Outstanding Player” of the tournament. His coach even made it public that he was the best high school player of that time.

Anthony opted not to continue his studies and entered into the 2003 NBA draft. He was selected with the third overall pick by the Denver Nuggets. During that time he also became good friends with LeBron James. His presence improved the team drastically as they went from a 17-65 record the previous year, to a 43-39 record in his rookie season.

The small forward is known for his offensive game but has always been criticized for his defensive game. In 2011, he traded to the New York Knicks as he declined to sign a new contract. He is also the the United States Olympic men’s national basketball team all-time leading scorer winning gold medals with the team in 2008, 2012 and 2016. Anthony married La La in 2010.

The fact that Anthony’s net worth is five times more than that of Stephen Curry just shows the quality he possesses. Anthony has been rated highly from his early college days signing million dollar deals at young ages. Anthony is also known for his philanthropic contributions. He contributed $1.5 million to the Living Classrooms Foundation that helps over 40,000 children in Baltimore. He has also provided relief efforts during the horrific 2004 Indian Ocean earthquake.

Carmelo Anthony Net Worth in years

Endorsements are a big part of the huge money he earns. He has a $58 million contract with shoe brand Nike alone. Another $28 million comes from deals with other big names like Samsung, Panini, Draft Kings, Nickelodeon and many more. The recognition from winning the NCCA championship has seen him land endorsement deals when he was a rookie. The 3-time gold medalist has had mouth-watering contracts which only seem to be getting bigger over the years as he seems to be at the peak of his career.

He has made $268 million in earnings over his career that is still going strong at 14 years. Taxes and other expenses have cut that amount. But, still the small forward has a cool estimated net worth of $111.5 million.