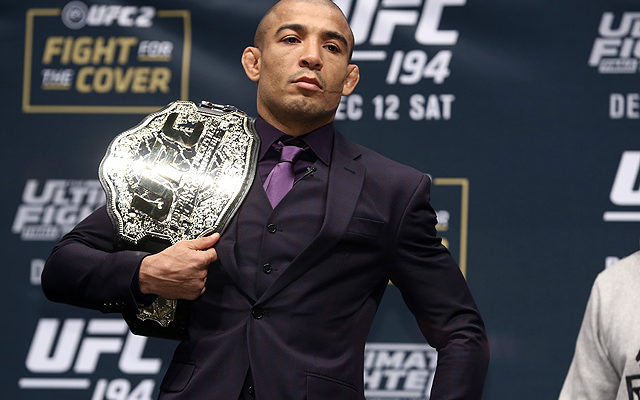 Jose Aldo net worth: José Aldo da Silva Oliveira Junior is a Brazilian mixed martial artist who is associated with the Ultimate Fighting Championship. He is the 2009 Fighter of the Year and has won the UFC Featherweight championship as well. As of 2017, Jose Aldo’s net worth is reported to be $9 million.

Aldo was born on September 9, 1986, in Manaus, Brazil. When he was a kid, Aldo wanted to a football player but certain incidents like regular beatings made him eager to become a fighter as he wanted to be able to defend himself. With this determination to make it big in the fight scene, he decided to move to Rio de Janeiro where he started training vigorously to make it professionally. Then he went on to compete in his first-ever professional MMA fight against Mário Bigola and beat him through a cold knockout.

Aldo, who always looked determined irrespective of the situation quickly moved up the ranks as he didn’t find much competition among his competitors there. Even though he didn’t have the best relationships with the organizations that he was involved with, he was still producing results when he was fighting.  He only got beat for the first time against Azevedo as a professional fighter. Following internal disputes, Aldo decided to join World Extreme Cagefighting where he debuted in 2008 against Alexandre Franca Nogueira.

His phenomenal record the next year helped him to win the award of Fighter of the Year from MMA as well as Sherdog.com. He was already amongst the elite in his weight class and looked as if no one was able to stop him. Wanting to do more, Aldo decided to join the Ultimate Fighting Championship which was starting to emerge as a big franchise in 2010. This merge from WEC to UFC seemed to benefit Aldo as he started gaining a large fan following as well during this time. He performed in many high profile matches winning honors like Fight of the Night on multiple occasions.

Jose Aldo net worth in years

He was a long reigning champion and seemed to be dominating the roster at that time. Feuds with Chad Mendes were popularized and then a battle with Conor McGregor followed. They had their fight postponed to December 11, 2015, because of an injury to Aldo. That night went on to be the most disappointing and embarrassing night for Aldo as the title defense was over within 13 seconds of the first round via Knockout and the world was left in awe. After this phase, Aldo went on to fight Frankie Edgar and won the interim UFC Featherweight Championship in the process.

Later since Mcgregor wasn’t able to defend his Featherweight belt, it was handed to Aldo who then became the Featherweight Champion. Still, Aldo is amongst the top fighters of his weight class and has made huge money through big money paper views like the one with Conor McGregor. He also has endorsement deals that are worth a lot of money and is still signed to a large contract with the UFC. The two-time UFC Featherweight champion has accomplished his dream as there was a time when Aldo was struggling for food as well.