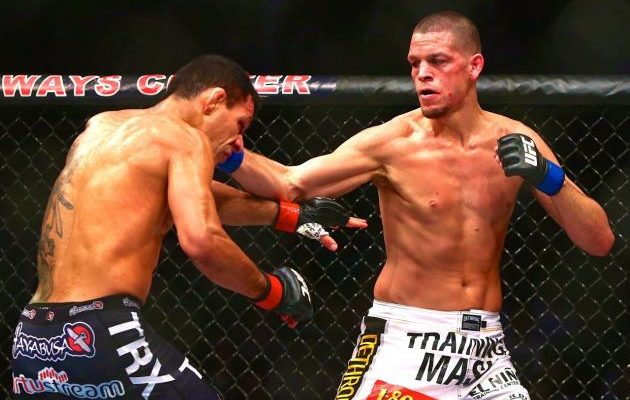 Nate Diaz Net Worth : Nathan Donald Diaz, known more popularly as Nate Diaz an American professional mixed martial artist who is currently associated with the Ultimate Fighting Championship(UFC). He is actually the brother of Nick Diaz , who himself is a UFC fighter and was a former Strikeforce Welterweight Champion and WEC Welterweight Champion. Nate has been in the fight scene from a young age and is also the winner of Ultimate Fighter 5. He has been talked about a lot recently because of his famous victory against Conor Mcgregor, who is considered the best fighter for his weight division in the UFC right now. As of 2016, Nate Diaz has an estimated net worth of $3 million.

Diaz was born on April 16, 1985, in Stockton, California. He was raised there with his brother Nick Diaz and together with him started training together at the tender age of 14. He studied at Tokay High School. He started off his career by competing in the World Extreme Cagefighting (WEC) and had fights with stars like WEC Lightweight champion Hermes Franca. He later participated and won in Ultimate Fighter 5 after beating Gamburyan by submission.

He then went on to the UFC where he dominated in his early fights beating Alvin Robinson, Pellegrino and Junior Assunção. From his early days, Diaz was known for his mockery during his fights, much like his brother Nick who played the mental gamre during fights getting opponents agitated and thus panicking. He has cited that it is one of the elements of his game that he started  from a young period of his career. His first main event match came when he fought against Melvin Guillard in UFC Fight Night 19.

Nate Diaz Net Worth in years

He then faced Jim Miller on May 5, 2012, at UFC on Fox 3 which he lost. That same year after heavy negotiations Diaz agreed a 8 fight contract with the UFC. From there onward there were an array of disputes with the UFC because of his behaviors and activity which violated their rules. He has been fined several times and once was even suspended for 90 days with a $20,000 fine because of rants on his Twitter account. He has also been fined money from fights because he didn’t meet the weight criteria in the scheduled time. He was even dropped from the UFC’s lightweight  rankings once because of lack of activity and number of fights where he called for an unasked hiatus.

His big break came in 2016 when he was set to face Conor Mcgregor on 11 days notice. Mcgregor was actually supposed to fight Rafael Dos Santos but eventually pulled out because of several reasons. The match was highly anticipated in the media and around the world. Even though Conor had been dominating the match, Diaz went on to win via submission shocking the world. He won a lot of money that night including Fight of the Night Bonuses. It was reported that he earned $500,000 just from that single fight.The rematch took place and was a real pound for pound fight going all the way. Even though Nate lost via unanimous decision, he pursed a whopping $2 million from that single match and a lot of respect too. As of 2016, Nate Diaz has an estimated net worth of $3 million.