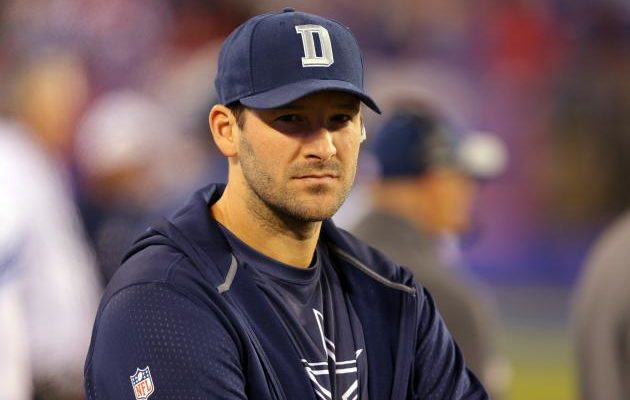 Antonio Ramiro Romo, who is better known as Tony Romo is an American football quarterback currently playing for the Dallas Cowboys of the National Football League (NFL). According to Forbes, he was 67th Highest Paid Athlete in the world.  He is also the highest undrafted player to be ranked on 2015 NFL Top 100 players list, coming in at 34. Romo is highly rated even today and still plays a vital role in the games for the Dallas Cowboys. As of 2016, Tony Romo net worth is estimated to be $45 million.

Romo was born on April 21, 1980, in San Diego, California. His father served in the navy for America while his mother was a store clerk. When he was little, he started off by playing baseball. Later, football became his first love and started playing quarterback for Burlington High School. He graduated from there in 1998 and earned honors like the All-Racine County football team honor.

He then went on to attend Eastern Illinois University where he would make a name for himself playing for the NCAA Division I-AA Eastern Illinois Panthers football team. He won the OVC Player of the Year award and was included in the All-Ohio Valley Conference as a member. Romo showed off his worth as he won the Walter Payton Award in 2002, and consequently led the Panthers football team to an Ohio Valley Conference championship in 2001.

Even though he was scouted by different teams, he remained undrafted in the 2003 NFL draft. He eventually signed as a free agent for the Dallas Cowboys. In his early years till 2005, Romo served as a holder for placekicks. He showed some impressions of greatness when he rushed for the winning touchdown with six seconds left in an intense game against the Oakland Raiders in 2004.

He made his first appearance in the Pro Bowl in 2007. He established himself as one of the front players for the team and proved vital to them every season. In the 2010 season, he broke his left clavicle and was kept on the injury list. The coming year, Romo managed four fourth-quarter comebacks which were very fascinating. In 2012, he was ranked as the 12th best quarterback in the NFL Top 100.

Tony Romo Net Worth in years

This came as a surprise to many as at that time there were many critics which disavowed him for not performing in the major games like the playoffs. He had managed to win just one playoff win in his entire career and noted that he was not able to perform in high intense matches. None the less, he signed a mega deal for 6 years worth a staggering $108 million in 2013. He was guaranteed $55 million in that contract and about $25 million were dependent upon player performances.

Romo has appeared in the Pro Bowl four times  and is a two time OVC Player of the Year. Because of his contributions to Eastern Ilinois, the number 17 he played with was retired. Romo who had once dated Jessica Simpson, is currently married to Candice Crawford who was the winner of Miss Misssouri USA in 2008. Together, they have two sons. It has been reported that Romo earned $22 million in 2016, out of which $5 million were from endorsements which shows his popularity and reach. He is also active for charities and has been involved with the Make-A-Wish Foundation and United Way. As of 2016, Tony Romo net worth is estimated to be $45 million.