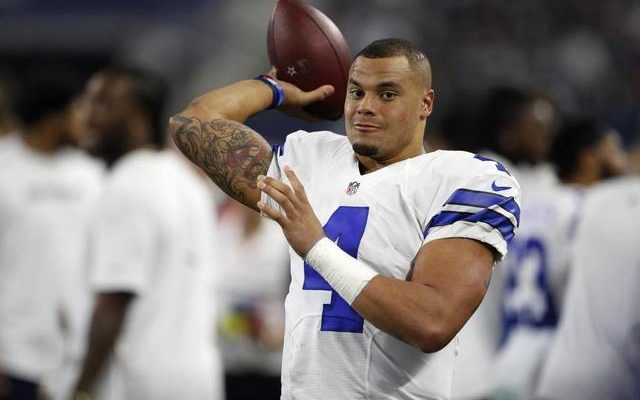 Dak Prescott Net Worth: Rayne Dakota Prescott, who is better known as Dak Prescott is an American football quarterback who plays for the Dallas Cowboys of the National Football League (NFL). The rookie has enjoyed stardom after he got a chance to play instead of the injured Tony Romo. As of 2016, Prescott has an estimated net worth of $700,000.

Prescott was born on July 29, 1993, in Sulphur, Louisiana. He studied at Haughton High School located in Haughton, Louisiana. He was one of the finest in his school and a top performer where he went on to set many records. After making a name there, he went on to start his college career at Mississippi State. In his freshman year, he was initially a backup to Tyler Russell but managed to appear in 12 games that season where his performances were very bright.

The next season in his sophomore year, he managed to play 11 games but Russell got the nod over him during that time. Even though he didn’t get as much game time as he would have liked, his performances were again praised and the statistics backed it up. He went on to be named to the 2013 SEC Fall Academic Honor Roll. This helped him to prove that he was worth a shot as a starter. And, he started to gain trust in the coach as well as he cemented his place in the squad and his effect was seen on the team as they ranked number one that year in its program history and went on to the Orange Bowl.

That was like a breakthrough year for him as he was one of the most improved players which coincided with the opportunity to start that he had managed to get. That season he went on to break 10 school records and his name was all over the college football atmosphere. He was awarded the Player of The Week for five times as well as winning the SEC Offensive Player of the Week three times. That year also he was on the 2014 SEC Fall Academic Honor Roll. He also finished eighth in the 2014 Heisman Trophy voting and went on to have many other spots for honors which he missed by a very small margin.

Dak Prescott Net Worth in years

This season had done wonders for his future career as well. He went on to set a total of 38 school records during his stay there and it is safe to say that he left as one of the legends in his college. He was a candidate for the next year’s 2015 National Player of the Year. Even though he missed out on this award he managed to win other awards like the Senior CLASS Award. Prescott’s mother had passed away in 2013 because of colon cancer. He was very close with her and even has a tattoo with Mom written in his hand.

After entering the NFL Draft in 2016, Prescott was drafted by The Dallas Cowboys. He was initially picked as a backup for regular starter Tony Romo who was a star player during that time. Even for the backup position, Prescott had some tough competition with Jameill Showers also trying to get that started position. He managed to get some game time after Romo had suffered a fracture during the preseason. He went on to start the season and made some notable appearances during this time.