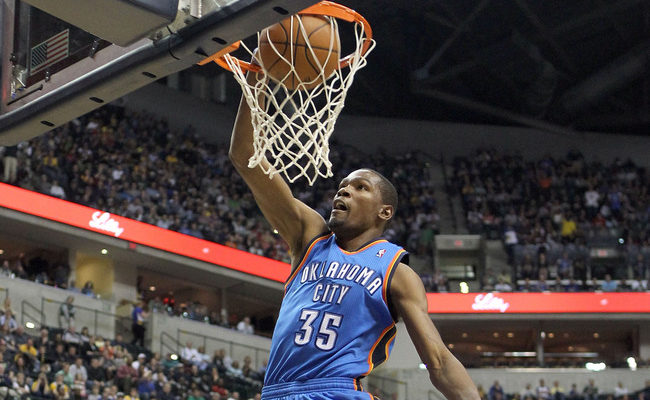 Kevin Durant Net Worth: Born on September 29, 1988, Kevin Wayne Durant is an American professional basketball player currently playing for the Golden State Warriors of the National Basketball Association (NBA). Not only is Kevin Durant one of the best players in the NBA, he’s also one of the richest. As of 2016, his estimated net worth is a staggering $120 million.

Durant was born in Washington, D.C  to Wanda and Wayne Pratt. When Durant was an infant, his father left him and his family. This meant that Durant was raised by his mother and grandmother. Later when he was 13, his father got back to him and took him to various basketball tournaments throughout the country.

This 6 feet 9 inch tall basketball talent was in the radar for a successful career from a young age. He played just one season of for the University of Texas, where he won many individual awards. In the 2007 NBA draft, he was selected with the second overall pick by the Seattle Super Sonics.

Durant who plays mostly at the small forward position, also won Rookie of the year award that season and joined LeBron James and Carmelo Anthony in the history of the league to average 20 points per game throughout the season.

During the 2009–10 season, Durant was selected to his first NBA All-Star Game. The next season he signed a five-year contract worth $85 million with Oklahoma City. The 2013-14 season was when the spotlights came to him as he won the Most Valuable Player award.That year he earned $35 million, making him the fourth-highest-earning basketball player that year. He also made a kind gesture by  donating $1 million to the American Red Cross.

Read Also:   Lionel Messi Net Worth- How Rich is the Argentinean Star?

Durant is married to Monica Wright, who is also a basketball player. Kevin has also helped the USA national team to win the 2010 FIBA World Championship ,2012 Olympics and 2016 Olympics gold medal. In 2016, he signed a big money deal with the Golden State Warriors worth $54.3 million for 2 years of service.

During his illustrious career he has earned big bucks with the help of endorsements from Nike, Sprint, Gatorade, 2K Sports and many more as well as chunky contracts.

Kevin Durant Net Worth in Years

Kevin Durant net worth of $120 million is from his salary and endorsements after deducting his expenses of tax, assets and fines during his career.